Back to the Past, the Present, and the Future: Conceptual Framework for the Treatment of Dissociative Identity Disorder and Even More! (Nashville Regional Conference)

Back to the Past, the Present, and the Future: Conceptual Framework for the Treatment of Dissociative Identity Disorder and Even More! (Nashville Regional Conference)

We are excited to conclude our 2022 Regional Conferences with an in-person Conference in Nashville, TN USA featuring Dr. Richard Loewenstein. This event will be an in-person event and will be recorded for those unable to attend in-person. We will not be offering a livestream option for this event. All in-person attendees will be required to submit proof of vaccination or a negative COVID-19 test from within 72 hours of the start of the training to be admitted. Additional COVID-19 mitigation such as social distancing and masking will also be put in place. Our primary goal is to make sure that all attendees have a fun but safe conference experience.

Abstract
This two-day workshop will review the core concepts that practitioners need to apprehend to successfully undertake the long-term psychotherapy of dissociative identity disorder (DID). The workshop begins with a discussion of discrete behavioral states theory (DBST), a transtheoretical and translational theory of human consciousness. Discrete behavioral states are so ubiquitous in normal and pathological human behavior as to be invisible. States can be understood as isomorphs, i.e., simultaneously at many levels of analysis, e.g., sleep states have been studied from cellular states to organismic states, and even shared social states of people sleeping together. Basic principles of DBST can be applied to, among many others, normal human development and attachment systems, altered states of consciousness, and as an organizing framework for many psychiatric disorders as fundamentally “state-change” disorders, e.g., bipolar and mood disorders, panic and anxiety disorders, substance-use and addictive disorders, trauma-and-stressor-related disorders, and dissociative disorders (DD), among others.

The workshop continues with a review of the foundational importance of psychodynamic psychotherapy principles for DID treatment, as well as understanding hypnosis and hypnotizability. The workshop will discuss how our language about the mind is inherently metaphorical. In particular, the phenomenology of DID is often reified, mechanical and physicalistic, e.g., referring to DID self-states as “parts”, as if the mind were a machine. The presenter will review DID as a developmental posttraumatic disorder of self-integration, requiring the therapist to conceptualize DID in terms of self-states, self-state systems, and the “whole human being”. He will review data from studies of the overall personality organization of DID. The latter helps to provide a framework for DID treatment to maximize DID patients’ resilient capacities. He will review all self-states as posttraumatic adaptations, e.g., reframing “malevolent introject” self-states as paradoxical protectors and/or “underground freedom fighters”. Working in this framework with these self-states from the beginning of treatment does not make DID treatment of DID “easy” but helps navigate typical pitfalls of concretely reifying these states based on superficial labels, e.g., “persecutory”. In this regard, the presenter will also discuss type-D attachment, betrayal trauma, shame and affect theory, coercive control, and moral injury. Day one concludes with a review of the concepts of traumatic and mind-control transferences, negative therapeutic reaction, and posttraumatic and dissociative aspects of transference/countertransference in DID treatment.

The second day will focus on clinical material. The presenter will discuss DID as a fundamentally logical disorder that can be decoded through application of the material from Day One. In addition, in the afternoon of Day Two, attendees are invited to “ask anything” by providing written questions about any topic of concern: clinical, theoretical, etc.

At the conclusion of Day One of this workshop participants will be able to:

At the conclusion of Day Two of this workshop participants will be able to: 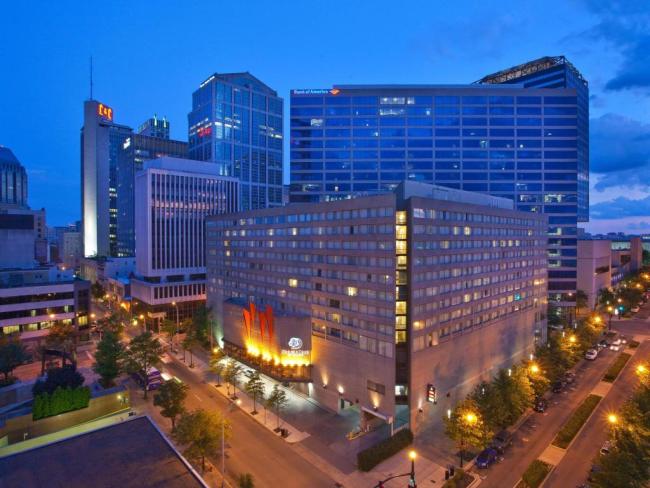 Hotel Information
The hotel is located in the heart of downtown Nashville, next to Printer's Alley and a five-minute walk from Broadway's row of bars and honky-tonks. The Ryman Auditorium, Bridgestone Arena, and the Country Music Hall of Fame are half a mile away. Enjoy live music every evening and a warm chocolate chip cookie when you arrive.

Dining is available onsite including a full-service Starbucks in the lobby as well as two additional options, Patio 315 and Fourth & U.

Valet parking is available onsite for $55.00 per day with in/out privileges.

Explore Nashville
Nicknamed "Music City, U.S.A.", Nashville is the home of the Grand Ole Opry, the Country Music Hall of Fame, and many major record labels. Since much earlier times it has been called the "Athens of the South", for its educational institutions and classical architecture. Nashville is also a major hub for the health care and publishing industries.

Much of the city's cultural life has revolved around its large university community. Particularly significant in this respect were two groups of critics and writers who were associated with Vanderbilt University in the early twentieth century, the Fugitives and the Agrarians.

Many popular tourist sites involve country music, including the Country Music Hall of Fame and Ryman Auditorium, which was for many years the site of the Grand Ole Opry. Each year, the Country Music Association's Fan Fair (renamed "CMA Music Festival" in 2003) brings many thousands of country fans to the city.

Civil War history is also important to the city's tourism industry. Sites pertaining to the Battle of Nashville and the nearby Battle of Franklin and Battle of Stones River can be seen, along with several well-preserved antebellum plantation houses such as Belle Meade Plantation and Belmont Mansion.

Nashville has several arts centers and museums, including the Frist Center for the Visual Arts, located in what was formerly the main post office; Cheekwood Botanical Garden and Museum of Art; the Tennessee State Museum; Fisk University's Van Vechten and Aaron Douglas Galleries; and The Parthenon.

Travel - Ground
Directions to Hotel from Nashville International Airport
Enter IH 35 North toward North Central Austin. Take the FM 2222 exit (238A). Move to the far right lane of the access road. After passing the Intersection of Hwy 290 E and IH-35, take the first right onto La Posada Dr. The hotel is located in Central Austin at the corner of La Posada Dr. and IH-35 North.

Presenter: Richard J. Loewenstein, MD
Presenter Biography: Richard J. Loewenstein MD is Clinical Professor of Psychiatry at the University of Maryland School of Medicine, Baltimore, MD. He is the founder of, and from 1987-2020 was the Medical Director of, The Trauma Disorders Program at Sheppard Pratt, Baltimore, MD. He is rated by U.S. News and World Report as among America’s top 1 % of psychiatrists. Dr. Loewenstein did a research fellowship at the National Institute of Mental Health in Bethesda, MD. In the past he was a faculty member of the Departments of Psychiatry at Yale University, New Haven, CT; George Washington University, Washington, DC; and University of California, Los Angeles, CA. He is the author of approximately 100 papers and book chapters on dissociation, dissociative disorders, and trauma disorders, among others. He is the Section Editor, Dissociative Disorders, of the American Psychiatric Association (APA), DSM-5 Text Revision (DSM-5TR), to be published in Spring, 2022. He is co-editor of the 4th Revision (in preparation) of the International Society for the Study of Trauma and Dissociation (ISSTD) Guidelines for Treatment of Dissociative Identity Disorder in Adults. Since 2000, he has been an author of the Dissociative Disorders chapter in Kaplan & Sadock’s Comprehensive Textbook of Psychiatry. He is leading the revision of the Dissociative Disorders chapter for the upcoming (11th) edition of this textbook. He is distinguished life fellow of the APA and, among other awards, has received the Lifetime Achievement Award of the ISSTD.

CE Credits will be available for in-person, live participation only. At this time we will not be able to offer CE credits for watching the recording of this event.

Discover New Connections in Nashville - Sign Up to Exhibit Today!
Our conference attendees represent the leading professionals in the world of trauma and dissociation. Our conferences allow for organizations to network with and promote your organization to attendees who have traveled from around the globe to be present. As a supporter or exhibitor, you will have the unique opportunity to tap into this esteemed network of professionals. Don’t miss out on this limited opportunity to connect one on one with psychologists, social workers, counselors and other mental health professionals who use and promote the products and services you have to offer!

Early registration ends November 30, 2021 at 5:00 PM ET. Prices will increase for emerging professional and professional/retired rates at that time by $50.

"Your Price" above reflects your final price based on your membership status, career level and any add-ons you choose to add to your registration.

Grievance Policy
ISSTD is fully committed to conducting all activities in strict conformation with the APA and ASWB grievance procedures.

During this conference, conference organizers, presenters and staff will address any concerns that arise. Every effort will be made to address the concerns during the conference when possible. If these individuals are unable to address the participant’s concerns, the complaints and grievances shall be presented in writing to ISSTD Headquarters at cfas@isst-d.org. These will be forwarded on for review by the Virtual and Regional Conference Committee.

Social Workers: Should social workers have a specific grievance, these grievances will be addressed by D. Michael Coy, LICSW. In situations where the social worker would have a conflict of interest, then, Christine Forner, MSW will review the grievance.

ISSTD strives to resolve grievances in a manner that is in the best interest of the participant. All complaints and grievances are reviewed within 5 working days. Formal grievances are required to be written and emailed as directed above and will be responded to within 15 business days.

Disability Policy (ADA)
We would be happy to accommodate your ADA needs. Please contact ISSTD Headquarters via email at cfas@isst-d.org or via phone at 844.994.7783 for assistance.